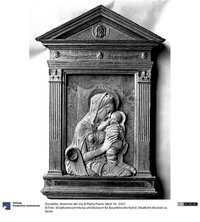 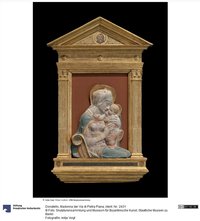 Virgin and Child (called the Madonna di via Pietrapiana)

Painted and gilt terracotta
69 x 56 cm (without frame)
The frame was not originally with the sculpture; it dates from the mid 15th-century (in the style of Michelozzo according to Schottmüller 1933). Inscription on the base: AVE.MARIA.GRATIA.PLENA.DOMINUS.TECUM.

Restoration
1995 (photograph of the reverse in the restoration files of the Bode-Museum).

Comment
The relief in terracotta is limited to the Virgin and Child, their haloes, and the faldstool of the Madonna, all painted with pastel colors; the background of the relief, and the frame in an antique style, with the frieze decorated with cherubs and garlands and the gable with God the father, did not originally belong with the Madonna. The seated Virgin is holding her son tightly in her hands, pressing his body against hers, while her face approaches his. All wrapped in swaddling clothes, Jesus has gotten his right arm loose from his bandages; he brings his fingers to his mouth. This is an intimate vision of a mother and child, in which the foreshadowing of the death of Christ is only apparent in the somewhat absent air of the Madonna.
Since its acquisition by the Berlin Museums in 1899 (by anonymous gift; an inventory book in the Bode-Museum mentions Prince Liechtenstein), this work has always been connected with Donatello. Typically Donatellesque are indeed the profile of the Virgin (see Inv. SKS 51), her arm parallel to the relief plane (Inv. SKS 59), the Antique-style faldstool on which she sits, the way she is dressed and her tight hold on the Christ Child (see especially the Virgin and Child in the Musée du Louvre; Inv. RF 353). The mantle of the Virgin is held together on her breast by a fibula with a seraph, as is the case with the Virgin of the High Altar of the church of Sant’Antonio, Padua. However, the quality of the Berlin Madonna is too modest to be more than a replica after a prototype by Donatello.
This composition is known in many versions under the name Madonna di via Pietrapiana, from a relief that was long on view in this Florentine street, near Santa Croce (today in a private collection). Long thought to have been a replica after a lost original by Donatello, the latter was proposed after restoration to be an original creation by Donatello (Avery 1985). Some scholars have alternatively attributed the composition to a follower of the artist: Fabriczy 1906 thought of Antonio da Pisa and Venturi 1908 of Francesco del Valente. The question cannot be solved as the oeuvres of these sculptors are still very elusive.

Cite this page
CC-BY-NC-SA @ Skulpturensammlung und Museum für Byzantinische Kunst
The textual information presented here is free for non-commercial usage if the source is named. (Creative Commons Lizenz 3.0, by-nc-sa) Please name as source not only the internet representation but also the name of the museum.
Rights for the images are shown below the large images (which are accessible by clicking on the smaller images). If nothing different is mentioned there the same regulation as for textual information applies.
Any commercial usage of text or image demands communication with the museum.