„Fig. 165. Fig. 166.
Published as the Act directs Jan.y 1. 1798, by N. Heideloff at the Gallery of Fashion Office, No. 90, Wardour Street."
Modedruck aus der Londoner Zeitschrift Gallery of Fashion. 1. Januar 1798.
Morning Dresses.
FIG. CLXV.
The front hair in very small curls; chignon turned up plain, and the
ends returned in ringlets. Casque bonnet of black velvet, trimmed across
the crown with a black curled feather, and round it with a band of rose-
coloured velvet; two black fancy feathers placed in a rosette of black curled
feathers in the front. Round gown of black spotted muslin; short sleeves
trimmed with black lace. Small handkerchief within the gown. Three
rows of black beads upon the neck, fastened on each side to the bonnet.
Black velvet cloak, trimmed with very broad lace. Black gloves and
buskins.
FIG. CLXVI.
The front hair cut very short at the ears and combed forward; the
chignon turned under, and the ends falling in ringlets upon the neck.
Bonnet à la Turque of black velvet; three stems of short black bush feathers
placed in a rosette of black curled feathers in the front, tied under the chin
with a white satin riband. Robe of raven-shaded double taffeta; Iong
sleeves; trimmed round the neck and sleeves, and twice round the train
with black velvet. Grey gloves. Black buskins. 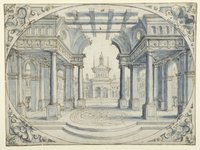 Cite this page
CC-BY-NC-SA @ Kunstbibliothek
The textual information presented here is free for non-commercial usage if the source is named. (Creative Commons Lizenz 3.0, by-nc-sa) Please name as source not only the internet representation but also the name of the museum.
Rights for the images are shown below the large images (which are accessible by clicking on the smaller images). If nothing different is mentioned there the same regulation as for textual information applies.
Any commercial usage of text or image demands communication with the museum.