Born in Altdamm, Pomerania, (today Dąbie, district of Szczecin, Poland), Gilly was known as a prodigy and the teacher of the young Karl Friedrich Schinkel. In 1788 he enrolled at the Akademie der Bildenden Künste in Berlin. His teachers there included Carl Gotthard Langhans and Johann Gottfried Schadow. In 1797 Gilly travelled extensively in France, England, and Austria. The drawings he made in France reveal his interests in architecture and reflect the intellectual climate of the Directoire. They include views of the Fountain of Regeneration, the Rue des Colonnes—an arcaded street of baseless Doric columns leading to the Théâtre Feydeau—the chamber of the Conseil des Anciens in the Tuileries and Jean-Jacques Rousseau’s grotto in its landscaped setting at Ermenonville, Oise. His 1797 design for the Frederick II monument reveals his debt to French neoclassicism, in particular Etienne-Louis Boullée, his explanatory notes indicate he intended the building to be spiritually uplifting. Beginning in 1799 Schinkel lived in the Gilly household at Berlin and was taught by Friedrich and Friedrich´s architect father David Gilly." - (en.wikipedia.org 30.01.2020) 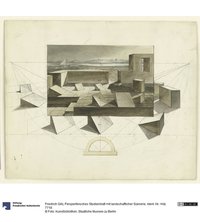 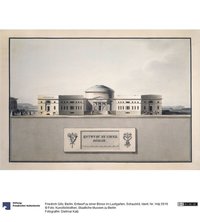 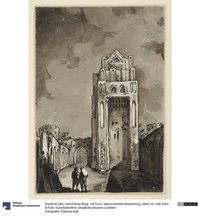 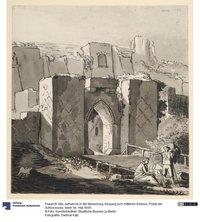 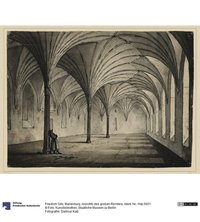 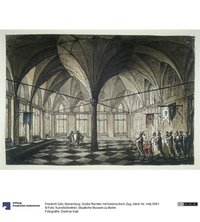