"The Xhosa people (/ˈkɔːsə, ˈkoʊsə/; Xhosa pronunciation: [kǁʰɔ́ːsa] (listen)) are a Bantu ethnic group from Southern Africa mainly found in the Eastern and Western Cape, South Africa, and in the last two centuries throughout the southern and central-southern parts of the country. There is a small but significant Xhosa-speaking (Mfengu) community in Zimbabwe, and their language, isiXhosa, is recognised as a national language.

The Xhosa people are divided into several tribes with related yet distinct heritages. The main tribes are the amaGcaleka, amaRharhabe, imiDange, imiDushane, and amaNdlambe. In addition, there are other tribes found near or among the Xhosa people such as abaThembu, amaBhaca, abakoBhosha and amaQwathi that are distinct and separate tribes which have adopted the isiXhosa language and the Xhosa way of life." - (en.wikipedia.org 20.10.2019) 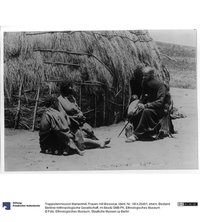