"In 1903 an earlier unknown collector’s name appeared in the documents of the Hungarian National Museum. Dr. Wilhelm (Guillermo) Bauer was a German collector living in Mexico. He was recommended to the Head of the Department of Ethnography of the Hungarian National Museum by Jenő Bánó as a person who would collect certainly ethnographical and archaeological objects in Mexico. Jenő Bánó, the recommender was a Hungarian landowner in Mexico who donated his Mexican collection to the museum (Gyarmati et al. 1997:113; Gyarmati in press). He was one of the several Hungarians who donated their Mexican collection to the National Museum of Budapest in the last decads of the nineteenth century. Although the America collection of the Museum of Ethnography exceeded in number 8000 items only in 2005 but the Department of Ethnography of the Hungarian National Museum including items originated from America is coeval with collection of several other European museums. In this early period of the collection its emphasis was in Mexico principally thanks to the Bauer collection. But the Hungarian National Museum was not Wilhelm Bauer’s first partner. According to the correspondence in the Ethnologisches Museum of Berlin, Bauer was in contact with this museum from 1901 to 1914, during which time the museum purchased a total of 2254 ethnographic and archaeological objects from him. He had a similar relation with the Linden Museum of Stuttgart between 1901–1907, to which he sold 695 objects. The portrait emerging from the correspondence surviving in the two German museums and in the Museum of Ethnography in Budapest is that of an independent collector, unaffiliated with any institution, who funded his collection activity from his own pocket and then offered the items he had acquired for sale. ..."
(PDF) Wilhelm Bauer, a German Collector and his Mexican Collections in the Museum of Ethnography, Budapest and in other Museums.
Available from: https://www.researchgate.net/publication/271012841_Wilhelm_Bauer_a_German_Collector_and_his_Mexican_Collections_in_the_Museum_of_Ethnography_Budapest_and_in_other_Museums [accessed Jul 02 2018]. 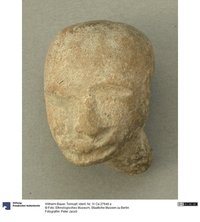