"Jacopo da Sellaio (c. 1441–1493), sometimes known as Jacopo di Arcangel, was an eclectic Italian painter from the early Renaissance, who painted in the style of the Florentine School. He was a pupil of Fra´ Filippo Lippi, with his contemporary Sandro Botticelli, who became a lasting influence on him. It is noted that by 1460, he had joined the Confraternity of Saint Luke (Italian: Compagnia di S Luca) in Florence, and in 1473, he is documented to have shared a studio with Filippo di Giuliano.
A number of da Sellaio´s paintings for decorative chests (Italian: cassoni) survive in collections, such as his Story of Cupid and Psyche commissioned for a 15th-century Florentine marriage and depicting the ancient romance of the marriage of the mortal princess, Psyche, to the god of love, Cupid. He executed another wedding cassone, The Nerli Cassone, in collaboration with Zanobi di Domenico and Biagio d´Antonio in 1472. His piece now in the Uffizi Gallery, The Banquet of Ahasuerus, was also painted with two other panels, including Esther before Ahasuerus (Museum of Fine Arts, Budapest) for a cassoni.

Da Sellaio´s small devotional pieces were well known, several of which depicted Saint Jerome and Saint John the Baptist. He also painted religious works for the church of San Lucia dei Magnoli and the church of San Frediano, both in Florence." - (Wikipedia (en) 13.07.2018) 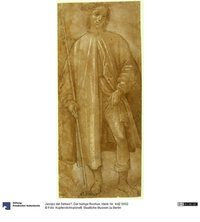