"Francesco Pesellino (probably 1422–July 29, 1457), also known as Francesco di Stefano, Il Pesellino, Francesco Peselli, and Francesco di Stefano Pesellino was an Italian (Florentine) painter. His father was the painter Stefano di Francesco (died 1427), and his maternal grandfather was the painter Giuliano Pesello (1367–1446), from whose name the diminutive nickname of "Pesellino" arose. After the death of his father in 1427, the young Francesco Pesellino went to live with his grandfather, Giuliano Pesello, adopting his name. Francesco Pesellino remained in his grandfather’s studio until the latter’s death, when he joined the studio of Filippo Lippi (ca.1406-1469). He married in 1442, and probably joined the Florence painters´ guild in 1447. In the following years he made a reputation with small, highly finished, works, either religious subjects for predellas or private devotions, or secular subjects, often for insetting into furniture or panelling." - (en.wikipedia.org 21.06.2020) 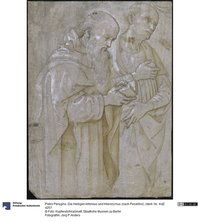