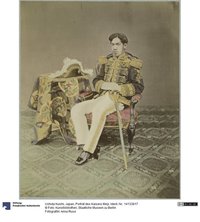 "Emperor Meiji[a] (明治天皇, Meiji-tennō, 3 November 1852 – 30 July 1912), or Meiji the Great (明治大帝, Meiji-taitei), was the 122nd Emperor of Japan according to the traditional order of succession, reigning from 3 February 1867 until his death on 30 July 1912. He presided over the Meiji period, a time of rapid change that witnessed the Empire of Japan rapidly transform from an isolationist feudal state to an industrialized world power.

At the time of Emperor Meiji´s birth in 1852, Japan was an isolated, pre-industrial, feudal country dominated by the Tokugawa shogunate and the daimyōs, who ruled over the country´s more than 250 decentralized domains.[citation needed] By the time of his death in 1912, Japan had undergone an extensive political, economic, and social revolution and emerged as one of the great powers on the world stage. The New York Times summed up this transformation at the Emperor´s funeral in 1912 with the words: "the contrast between that which preceded the funeral car and that which followed it was striking indeed. Before it went old Japan; after it came new Japan."

Since the modern era, when an Emperor of Japan dies they are given a posthumous name. Such a name is a combination of the era of which they reigned and coincides with the Emperor´s contribution to the throne whilst they were alive. Therefore, while publicly known during his life merely as "The Emperor", he is historically known as "Emperor Meiji" after his death. He obtained this current title in reference to the Meiji period which spanned almost the entirety of his reign. His personal name (which is not used in any formal or official context, except for his signature) was Mutsuhito (睦仁).Cite error: There are <ref group=lower-alpha> tags or {{efn}} templates on this page, but the references will not show without a {{reflist|group=lower-alpha}} template or {{notelist}} template (see the help page)." - (en.wikipedia.org 15.09.2019)